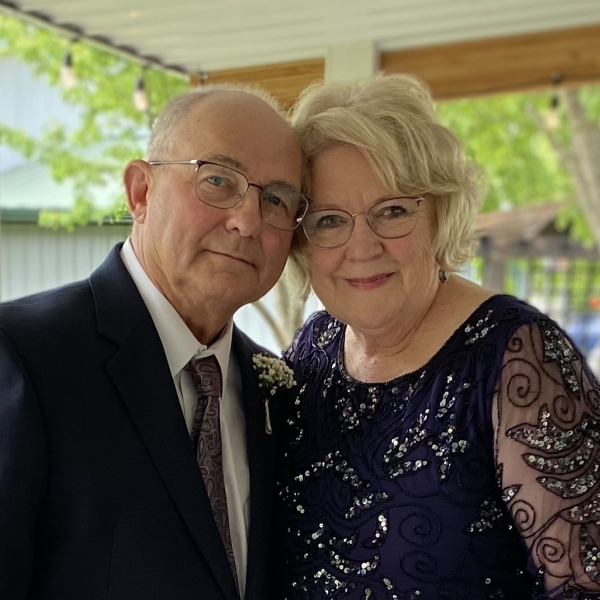 We’re blessed it happened the way that it did

Bill, 71, had a history of heart attacks dating back to the late 1990s and had received stents twice in 2016. The stents did not stay open, which led to Bill having open-heart bypass surgery in 2017. At the time, doctors said his aortic valve showed early signs of stenosis and that they would keep watching it.

In April of 2021, Bill went through a workup to prepare for a valve replacement. But shortly before the procedure, he experienced another heart event, which doctors at the hospital determined was a mild heart attack. With his grandson’s wedding coming up soon, this called for a change in plans.

“Bill’s doctor told us he was going to have to have that valve replaced sooner rather than later,” said Mary, Bill’s wife. “The doctor said it’s like a tire on a car; you try and run it for 200,000 miles and it just doesn’t have that many miles in it. So they kept him in the hospital overnight, and first thing the next morning they transported him down to Abbott. We’re blessed it happened the way that it did. We’re thankful he was able to have the TAVR and didn’t need to have open-heart surgery again.”

Bill’s procedure was performed by Dr. Santiago Garcia, an interventional cardiologist and researcher in the Valve Science Center at the Minneapolis Heart Institute Foundation® (MHIF). Through their research at MHIF’s Valve Science Center, Dr. Garcia and other cardiology researchers have become industry leaders in minimally invasive, non-surgical valve repair and replacement.

Thanks to the advanced transcatheter technologies available today, patients can receive a valve replacement without the need for general anesthesia, allowing patients to go home the next day. This meant the world to Bill, who was able to have his procedure in the days leading up to his grandson’s wedding and not miss the event!

“It was amazing, because I had the procedure done on a Thursday and we were able to be at our grandson’s wedding that Saturday,” said Bill. “I didn’t do a whole lot, but just the presence of being there was overwhelming to me … very emotional. Because at the time I went in for the procedure, I didn’t know where I was going to end up.”

A retired farmer living in West Central Minnesota, Bill was happy to quickly resume the activities he enjoys, including helping his son-in-law farm, fishing and deer hunting with his son and grandsons, as well as bowling and golfing.

“Not enough can be said about the hospital, the care that he received and the care that they gave me as well,” said Mary. “Dr. Garcia was amazing, as was his partner that helped assist with the replacement.”

Mary added, “I think he appreciates the fact that it’s behind him now and recognizes there were a lot of things he wasn’t doing because he just didn’t feel up to it. Before the replacement, he’d sit down in the chair and be sleeping in five minutes or less. And that just tells me how exhausted he was.”