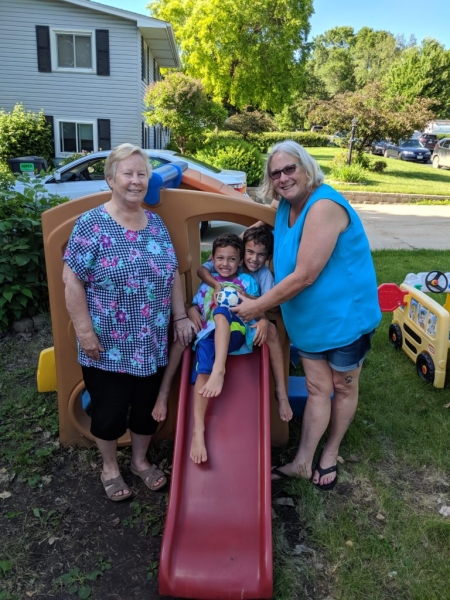 Shelley Peterson, 58, has had asthma her entire life, and knows her body and her symptoms well. Now, after having three different heart-related procedures in a span of three years, she knows more than ever how it’s absolutely critical to pay attention to anything that just doesn’t seem right with her body.

“It turned out that it wasn’t always my asthma, it was my heart that was giving me all the trouble,” said Shelley. “When I went in three years ago and they put in stents, I was having a hard time breathing and my chest was tight, but it never crossed my mind that it was my heart. They told me if I had waited a couple more weeks, I would have been coming in on a stretcher and be lucky if I had lived. I knew something wasn’t right. I was scared to go in and get it checked, but I knew I had to.”

In February 2019, her symptoms were different. She’d lost her voice for five days and was having trouble breathing. She thought it was her asthma, but said it felt a little different than her normal asthma. She was shocked to eventually learn that she needed a quadruple bypass. Then, just four months after having the bypass, she experienced even more severe symptoms.

In June 2019, Shelley was referred to Dr. Manos Brilakis, a Minneapolis Heart Institute® interventional cardiologist and researcher at Minneapolis Heart Institute Foundation® (MHIF). She learned that two of the grafts from the quadruple bypass were not functioning and her right coronary artery was jeopardized. In fact, her right coronary artery was 100 percent blocked, which is called a chronic total occlusion (CTO) and refers to a complete or almost complete blockage of a coronary artery for 30 days or longer.

“Dr. Brilakis told me I had very small arteries, but that he was going to do the best he could and get it open and stretch it out and get a larger stent in there so I won’t have any more problems,” said Shelley. “He said, ‘It won’t change your length of life, but it will change your quality of life.’ I was all for it because I couldn’t do anything. I’m constantly on the go … always doing something, and I couldn’t. Life was getting me down.”

Post-procedure, Shelley is looking forward to living her life to the fullest again with her grandkids and also being able to exercise again and live a healthier lifestyle.

“I feel a lot better since this last procedure; I don’t have the pain,” said Shelley. “I still have a little bit of shortness of breath, but I figure that’s because I’m so out of shape from the last four months that it’s going to take a little while for me to get back to my normal breathing and getting everything going again. I really enjoyed being able to exercise in the past and not die from it basically.”

Her advice to other people — especially women — is simple. “You’ve just got to pay attention to your body and know that there’s something different going on. Don’t be afraid to go in and get it checked. It’s better to go in, have it checked.”