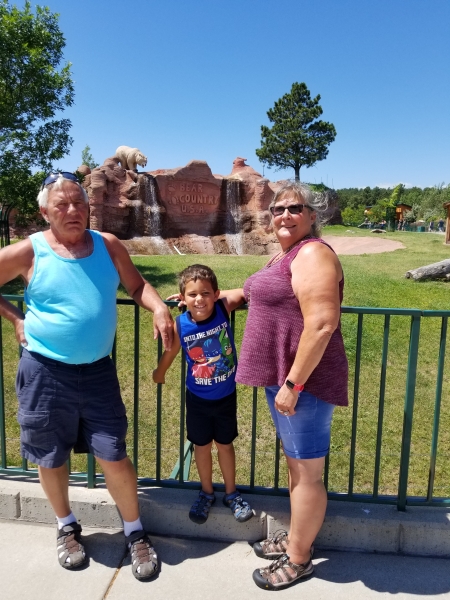 Lynn Hammrich is no stranger to heart disease and its impact on his family. At age 41, he had his first heart attack, more than 20 years ago. Over subsequent years, he required coronary artery stents on four occasions, including a long series of stents in one of the heart’s three major arteries, often referred to as a “full metal jacket.”

“It runs in the family on my side pretty heavy,” said Lynn. “I had a brother who died at 31 of a massive heart attack, and another brother has four stents. I’ve got 13 I think now. And I had six uncles die of heart problems.”

In May 2019, Lynn once again had been feeling tired and was having chest pains, but it initially didn’t seem concerning to him.

“I was just tired; I had pressure in my chest, but not like my other three heart attacks,” said Lynn. “It was more of a lighter pressure, you know? I thought it was muscle. That’s why I never went in. So when I did go in, I was 100 percent blocked.”

After heading to his local hospital in Eureka, South Dakota, Lynn was transferred to a hospital in Aberdeen. He had developed a chronic total occlusion (CTO) involving his right coronary artery, which is complete blockage of a coronary artery for 30 days or longer. His doctor’s attempts to open the blockage were unsuccessful.

“He said there was nothing more he could do for him and the best place they would like to send him would be to Abbott, because that’s probably the only place that could do it,” said Kristi Hammrich, Lynn’s wife.

The next day, Lynn was transported via a five-hour ambulance ride to Abbott Northwestern Hospital, where Minneapolis Heart Institute® interventional cardiologist Dr. Manos Brilakis performed a technically advanced procedure called chronic total occlusion–percutaneous coronary intervention (CTO-PCI) to open the blocked artery. The minimally invasive procedure offers an alternative for patients with completely blocked arteries where standard catheter-based techniques may not be effective, or when open-heart surgery is considered too risky for a particular patient. The CTO-PCI procedure requires extraordinary skill; only 2 percent of U.S. interventional cardiologists are qualified to perform the range of techniques used.

“I was just totally amazed what went on. It’s a wonderful place,” said Kristi. “I just pray to God that if something ever goes wrong, that that’s exactly where we’ll end up again. We were very impressed with everything and everybody was so attentive. With the nursing, the relationship between a patient and the staff. I mean, unreal. I’ve never seen anything like it, and I worked in the medical field for 23 years.”

The Minneapolis Heart Institute Foundation (MHIF) is a nonprofit research organization that partners with the cardiologists from Minneapolis Heart Institute®. MHIF is a leader in CTO-PCI research and Dr. Brilakis leads a large clinical trial team investigating treatment of complex CTOs as well as a range of other coronary artery disease conditions. The team helps educate other cardiologists across the world on new and innovative treatment methods by maintaining two websites that allow them to view and learn from 170 online patient procedures.

Two months post-procedure, Lynn was feeling better and more energetic. Lynn and Kristi’s then four-year-old grandson Prestyn was also along for the hospital journey, and the experience helped him better understand how his grandpa feels and perhaps planted the seeds for a future medical career.

“The staff treated him just like he was a patient,” said Kristi. “Everybody was so good. I was so impressed. The doctor even gave him a piece of paper showing where he put the stent in the heart. Since we got home, Prestyn’s been playing doctor and doing blood pressures … he’s drawing blood … he’s starting IVs. He’s getting it all done.”

Thanks to research into treatments and education done through the MHIF Complex Coronary Artery Disease Science Center, more and more patients with complex coronary artery disease like Lynn — and their families — can continue to discover hope.