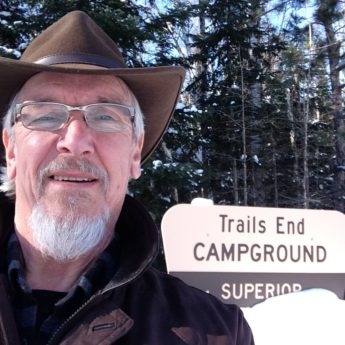 When Ed Peitso of Big Lake, Minn., retired after a 45-year career in IT, he was excited to be able to fulfill a 50-year dream of being accepted into the Peace Corps. In 2012, Ed headed to Ghana, West Africa, for a planned two-year assignment, but after just a month, he got sick and had to return home. For the next year, Ed continued to wonder if he could have “gutted it out” and been able to stay the full two years. It was only after experiencing a heart attack about a year later on his way home from the gym that he was able to let go of his remorse over not being able to fulfill his Peace Corps obligation.

“I’ve heard some references of the kind of heart attack I had and some people refer to it as a widow maker,” said Ed. “It’s scary and I’m grateful for having made it through it. I remember laying in the hospital bed up in my room that afternoon, my wife Deb by my side, and things had kind of settled down a little bit. It dawned on me that this is the reason somebody sent me home from Africa. Because where I would have been living in Ghana, I would have been three days away from the hospital and I never would have made it. That feeling stays with me through today.”

Several months after his heart attack, Ed had another experience that he feels was pretty much destiny. Dr. Jay Traverse at the Minneapolis Heart Institute Foundation (MHIF) was conducting the ALLSTAR study, which was examining whether the use of cardiac stem cells from unrelated donors could reverse lasting tissue damage after a heart attack. Depending on the amount of heart muscle damage, a heart attack survivor may develop heart failure. Ed was contacted to participate in the randomized study and after enrolling, he received a stem cell infusion (vs. a placebo).

He had a follow-up MRI not long after as part of the study and unfortunately, researchers determined that his ejection fraction (the percentage of blood that’s pumped out of a filled ventricle with each heartbeat) had fallen down below the minimum level required to continue his participation in the study. To help his heart pump more efficiently, doctors told him he needed to have a type of defibrillator implanted.

“I remember telling Dr. Traverse how grateful I felt having been invited to participate in the study, because it was only in the process of the study that I discovered that my ejection fraction had decreased. That was a big grateful moment for me … and I was able to do something about it by getting the multifunction implant, the pacemaker and defibrillator. I consider it like a little insurance policy now. I don’t know what my future would have been … what would have happened to me had I not been in the study. How much would I have degraded before we realized something was really wrong?”

While having a defibrillator meant Ed was no longer able to participate in the ALLSTAR stem cell study, a few years later he was eligible to participate in another stem cell study led by Dr. Traverse at MHIF called the CONCERT-Heart Failure study, which is funded by the National Heart, Lung, and Blood Institute. The study seeks to determine whether cardiac stem cells from the patient himself, either alone or in combination with stem cells derived from bone marrow, are safe for and beneficial to people who have chronic heart failure.

Despite having a diagnosis of heart failure, Ed feels good and said he’s able to live “a fairly unrestricted life.” While at 76 he no longer has the same level of endurance he did in his 60s, he still enjoys getting out kayaking on their lake, bicycling, hiking, working out, and puttering around his yard. During a follow-up visit with his cardiologist in the fall of 2020, Ed had an echocardiogram and was pleased to learn that his ejection fraction had improved by a couple percentage points.

“So how much of that is due to normal variation, or have the stem cells made a difference? I at least would like to think so,” said Ed. “Whatever the reason, I’ll take it. You hear or read stories about people who have heart failure and some of the people, they can’t do anything. I’m not that way. I think I am almost limited more by the effects of age than my heart.”

He continued, “If I were having to face this more alone, without any help from today’s technology … 20, 30 years ago people didn’t have this kind of chance. It might’ve been a very, very different life for me; I might have been truly suffering the effects of congestive heart failure. Whereas the help that I’ve gotten through the procedures that I’ve had, the quality of my life has certainly been far, far better than it could have been. I guess life has worked out the way it was supposed to. I did fulfill my dream. Maybe not completely, but there’s no more regrets on any of that. I guess I’m making light of it a little bit, but I’m just a happy camper given the way things are now.”