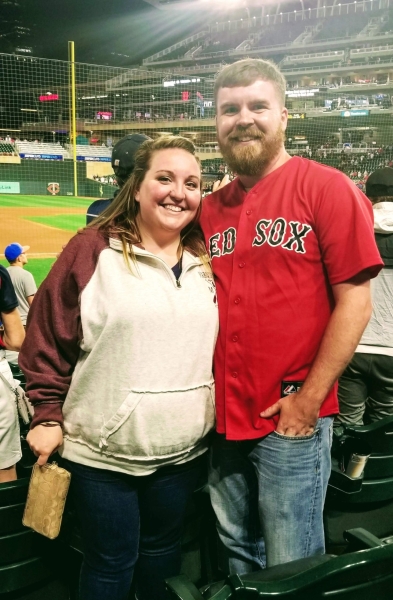 "I changed and adapted. We were able to have two very beautiful, healthy babies. Without my pacemaker, I wouldn’t be here today."

Ashley is a mom, first and foremost, of two children, Brooklyn, 7, and Braiden, 6, with her partner Nick for 11 years. As a self-admitted cat lover and adventure-seeker, she spends most of her free time with her family outdoors, dirt biking, camping, fishing, hunting and more.

Growing up, Ashley loved playing sports, and would often think that any odd symptoms she experienced were simply side effects of being a teenager, like butterflies in her chest. But at the age of 16, something happened that would quickly change the trajectory of her young life.

One day at school, Ashley had trouble catching her breath and struggled to make it up the stairs. After visiting the nurse’s office, Ashley’s lips were blue and she was recommended to be sent home to rest. When Ashley arrived at home, her mother knew something was wrong and immediately drove to the ER at Children’s Hospital.

Dr. Sutton at Children’s did an echocardiogram, quickly discovering Ashley had a congenital heart defect and an atrial septal defect. She was officially diagnosed in February 2007 and was advised to take it easy; no longer able to do all the sports she previously loved.

In April that year she had surgery, only to find more significant complications. Her heart had doubled in size in just two months, compressing her lungs. Her physician also discovered a one-inch hole in her heart along with a genetic abnormality in the structure of her mitral heart valve. Ashley was in 100% heart block. After two weeks in the hospital, Dr. Moga and his team concluded her heart needed a pacemaker.

Ashley’s first dream was to join the air force and become a pilot. After her diagnosis, Ashley felt lost and needed to quickly find a new path as her high school days would soon end. Dr. Moga encouraged her, explaining she’d be a great fit for his team one day. This motivated Ashley to keep moving forward, eventually aspiring to become an anesthesiologist as she started college.

“I changed and adapted. We were able to have two very beautiful, healthy babies. Without my pacemaker, I wouldn’t be here today,” explained Ashley.

“I first heard of the foundation because I heavily researched MHI when I switched over from Children’s to ensure my care was still top notch, and it definitely is,” said Ashley. The next time she was job searching, MHIF easily came to mind.

“When I chose MHIF, I was really thinking about the top companies I wanted to retire at. I was in a weird place at my current job, and MHIF came to mind as one organization that would really mean a lot working for,” she explained. Ashley joined the team at MHIF in January 2022 as a Research Finance Specialist.

When explaining her work, Ashley said, “my job is to make sure MHIF is getting paid appropriately from our research funders. I also make sure patients aren’t getting bills from insurance that they shouldn’t, and that they’re receiving the stipends they’re eligible for and reimbursed for their time. I may not be on the medical side, but finances are such an important and stressful part of research for our patients, so it’s really important work.”

When asked what was one of the best parts about working at MHIF, Ashley explained that “if I could say one thing as someone who is a current patient and was looking for a career at MHIF; you will be treated the same as a patient as you are as an employee. The MHI providers are so caring and understanding. They’re not like other specialists. MHI providers treat you like you actually matter. Then when you work at the foundation, it’s the same exact thing. I feel so comfortable, welcomed – I’ve never had a job that did that. People here care about each other – as an individual, as a family member and as an employee.”

Ashley may be eligible for new research studies in the future. “If there’s a study I’m eligible for, 100% yes. I would know that I’m in good hands. They wouldn’t let me into a research study if they weren’t certain I would benefit from it. But absolutely, I think I’d feel empowered to qualify for research. Me being a research subject could impact millions of lives, and if any research organization is going to have an option for me, I know it would be at MHIF.”