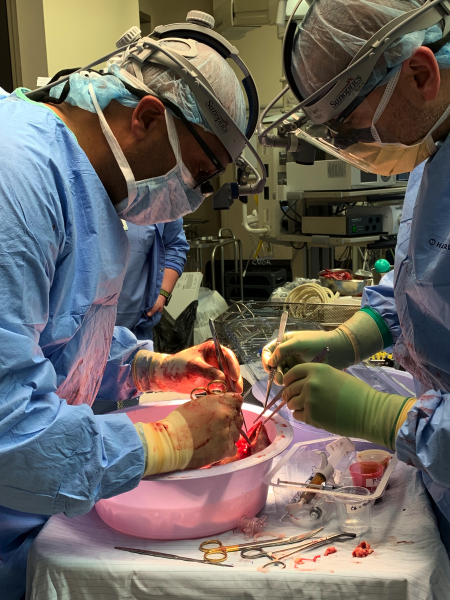 Across the United States, the availability of donated hearts remains limited and tragically, many patients die waiting before a donor is found. According to the U.S. Department of Health and Human Services Organ Procurement and Transplantation Network, as of late September 2019, there were nearly 3,700 candidates on the waiting list for a heart transplant.

The Minneapolis Heart Institute Foundation® (MHIF) is excited to be at the forefront of new clinical research that is working to find viable solutions to the problem. Since August 2019, MHIF’s heart failure researchers, in partnership with the Abbott Northwestern Hospital Heart Transplant Program, have completed three successful heart transplants with use of the investigational TransMedics Organ Care System (OCS™). Often referred to as a “Heart-in-a-Box”, the OCS™ Heart is a revolutionary system that preserves donor hearts, keeping them beating instead of simply storing them on ice in a cooler during transport as has been the traditional approach.

MHIF is one of ten centers nationally that are currently participating in the EXPAND Heart Trial to study the effectiveness of the OCS™ Heart system, which is the only system currently under FDA review for unutilized donor hearts.

“We are honored to have had the opportunity to play a part in giving three patients a second chance at life and pleased that these patients have had very successful outcomes,” said Dr. Karol Mudy, a Minneapolis Heart Institute® cardiothoracic surgeon and MHIF researcher who serves as principal investigator on MHIF’s trial. “We are excited to be researching this unique system that may hold the potential to help save many more lives.”

According to TransMedics, there are three primary reasons why transplanting a human heart is still difficult, despite modern medical and technological advances. First, the supply is very limited; only about 4 percent of organ donors end up donating a viable heart and only about 30 percent of those end up making their way to recipients. Secondly, the heart and recipient have to be a suitable match. The last problem is the biggest — a heart transplant must occur within six hours. The longer the heart is outside the body, the riskier it is to implant the heart, and thus many heart donations go unused from various geographic locations because of the transport time required.

The OCS™ Heart system acts as a miniature intensive care unit that keeps organs alive and healthy by preserving them in a natural state that mimics the human body, so that organs can remain viable for transplant along the way to recipients. The system holds the potential to reduce ischemic time, which is the time that the heart is outside the body and not beating or being supplied with oxygen to the coronary arteries. By reducing ischemic time, patients could potentially receive donor hearts from an expanded geographic area, such as from Hawaii, where currently about 30 or 40 donor hearts go unused every year because the transit time to the U.S. mainland exceeds the six-hour window.